This is the story of an amazing running group started in 2013 by Tim Boyle, this is how it started…

A message from Founder, Tim Boyle – In 2013 there was a man who had quit smoking and started putting on the weight associated with quitting. He was looking for inspiration to run. He found it in a kindhearted man by the name of Michael Wasserman.

Wasserman is a 58 year old legend in his own right, he is confined to a wheelchair and has Down syndrome. Tim Boyle, the ex smoker, decided that he was going to start running to lose the extra poundage but couldn’t muster the inspiration to run. So he decided to run for Michael. He dedicated all his miles to his buddy. That’s where it all began.

Seven years, 40,000 people, and 17,000 matches later, I Run 4 is still going strong! It has been heralded by Facebook as one of their most inspirational groups. Follow this link to find out more about “I Run For” has changed lives. https://whoirun4.com/

Runners join the group and are then allocated a running buddy. Buddies are nominated, often by parents, they are then paired.`

My grand-daughter Ellie has special needs and has a runner in the US who runs for her.  Her name is Amanda Benedict, she lives Ashley, Ohio.  Ellie and her family live in Melbourne, Australia. A long distance in between, Ellie’s Mum and Amanda have made friends on facebook and are able to connect.   I know how much joy the runs give to Ellie and her family, her young brother is very impressed with the medals. I also know the satisfaction and pride it gives to Amanda and I’m sure other runners in I Run 4 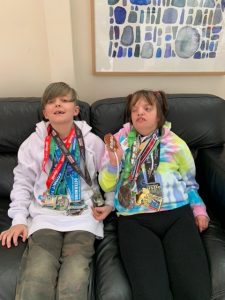 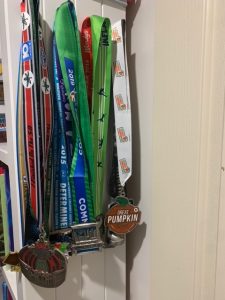